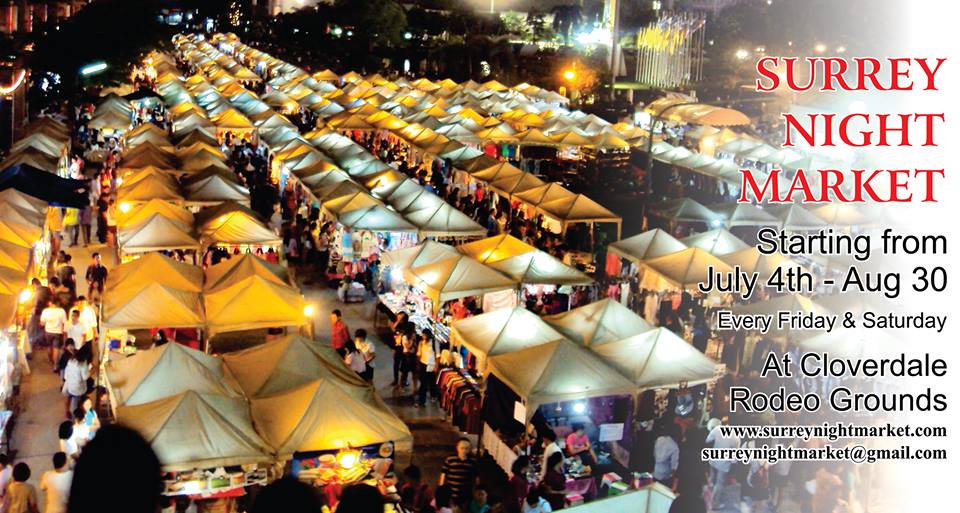 6050 176 Street, Surrey, BC (Across the Agriplex, Cloverdale Exhibition Grounds)


Yes it’s real, the Surrey Night Market is projected to open on Saturday July 5th through August 30, 2014 – and isn’t it about time? The swarm of exhibitors, visitors, and media sponsors supporting the ‘world famous’ Richmond Night Market every summer (May-Oct) raised enough interest for a group of 5 organizers to organize a separate Surrey Night Market which will open the first weekend of July 2014.

“Event organizers are currently taking applications from vendors for both food and retail as well as for performers, musicians, sponsors, and so forth. Forward all inquiries to contact details found HERE”

The timing couldn’t be any better

Residents of Surrey may soon begin to embrace their own sense of culture and community without resorting to to that of Vancouver – which by the way has been comparatively cold or lacking in the community department as well. Residents South of the Fraser have also long been losing their minds searching for ways to entertain themselves on the weekends. It is no news that many residents of Surrey, White Rock, Langley and so forth have had to commute an hour, over a bridge just to get somewhere that is ‘exciting’ enough to feel like their weekend wasn’t completely wasted. The once exciting hot spots in the Surrey area have been disappearing slowly or have moved elsewhere over the years. There are as a result high hopes that the Surrey Night Market will be a big success in its opening night and that the event will continue to run year after year.

The Surrey Night Market is expected to attract many visitors and even provide a boost to surrounding businesses.

Sources have projected an estimated 5000 visitors per night to the Newly Opening Surrey Night Market but that number could be much greater than expected. The launch of a Night Market in Surrey comes as good news to many residents in the local area. People living in White Rock have mentioned travel as being one of the reasons why they did not go to the Richmond Night Market. The close proximity of the Surrey Night Market may entice even the first timers to make their first visit and finally experience the multicultural aspects of the event. Food, dancing, music, and more food.

The well known Richmond Night Market at 8351 River Rd is currently enjoying its 14th year of success. Much of the success of the Richmond Night Market had to do with the organic word of mouth recommendations in the Lower Mainland. Less people go for the retail aspect than they do for the food in more recent years. It is still a good place to buy novelty retail items and find good deals in the process. The fact remains that there is a large selection of different foods. Over 500 different things to try! Go hungry with cash on hand. Videos

Who will be the next big hit? The Next Rotato phenom?

Predicting over 100 different vendors (70-80% of them food – multicultural)

Unlike attending the Richmond Night Market, which has a distinct Asian theme, those who appreciate sampling foods from many different cultures in one night may have one heck of a culinary experience at the Surrey Night Market. There is expected to be over 100+ vendors (mostly food) ranging from Caribbean, Vietnamese, Mexican, Fijian, Chinese, Indian, Korean, Ukrainian, Latin American, Greek, Philippine and more. If you can point to a country on the globe then that country’s cuisine is probably going to be there. If you would like to become a vendor, represent Surrey’s culture, and offer visitors something of value then get in touch with the organizers before all spaces are filled. Click HERE to contact the organizers.

If you are a resident of the Metro Vancouver area then you may already be familiar with the Surrey Fusion Festival (see link for info) which takes place for 2 days on July 19th and 20th, 2014. A noteworthy convenience is its close proximity to public transit. Just hop off at Surrey Central SkyTrain Station and take a short walk to Holland Park (perhaps after taking a stroll through Central City Shopping Mall). Lots of good food from different cultures.

The Surrey Fusion Festival is located at:
Holland Park, Surrey, BC SW – Corner of King George Boulevard & Old Yale Road (Kind of hard to miss as you will notice the fencing, displays, tents, sounds, and smells. If in doubt just follow the crowd). [Directions]

Have you seen Surrey’s new City Hall? Big things are in store for Surrey’s future.

Why Here, Why Now?

Surrey’s population is expected (inevitably) to surpass that of Vancouver in less than a decade. Though the Surrey Night Market has been initially organized by 5 people it will only be successful enough to operate year after year with enough support from the community. Please start sharing the news and plan to be there on opening day.

– What in your opinion were some of the things that made the Richmond Night Market a success? How can it be done again at the Surrey Night Market?

– Commuting from Vancouver? No direct SkyTrain route. Also, will there be adequate parking available? It is no secret that most people hate long lineups and would even pay to get in quickly. It will be interesting to see how organizers arrange these accommodations.

This site uses Akismet to reduce spam. Learn how your comment data is processed.